Sometimes I get a bit irritated by all the photos that people post to their blogs, Twitter and wotnot, of the latest plants in bud or full bloom in their gardens. I know that those “down Souf” can expect to be a bit ahead of me and those “oop Norf” to be a bit behind. Here, in central South Wales (that’s the original one, not the Antipodean upstart), I enjoy an odd micro-climate (Derek the Weather on BBC Wales once refused to believe my outdoor thermometer readings – I have several, all in the shade, and I take the average). This means that, usually, I get things flowering a bit ahead of time.

This year, though, things have gone a bit awry. I was strolling round the garden yesterday, in a drizzle intermission, checking on my roses which, I have to admit, I’ve been neglecting since I had a hissy-fit when Thomas Stone started posting photos of his rose buds whilst mine hadn’t even bothered to set the alarm clocks. I’m not a rose fanatic – you need the space to be one of those – but I do like my scattered bushes when they burst into bloom. This year they’ve been very tardy.

But they seem to have woken up at last. Some also seem to have decided to play host to the first aphid infestation I’ve had in the garden for several years. To be honest, it got so bad last year that I was scouring the interwebs for sellers of greenfly. I was worried that the ladybirds would starve! Indeed, the population of ladybugs (and their larvae) and lacewings has diminished substantially here as, for some reason best known to someone else, the green and black fly set up home elsewhere.

They must have a cunning plan for, this year, they’ve suddenly appeared en-masse. And barely a ladybug to be seen!

I think a bit of (organic) bug killer will be called for this evening.

But, bugs aside, at least I have progress at last.

“Prince William” doesn’t look too promising. He excelled this year with a performance potentially double that of last year’s single, though perfectly-formed, bloom. He produced two buds. One has opened. The other has died. Maybe I’ll extra-hard prune him this year and give him a final chance next year. On the other hand, he’s aphid free! I wonder are aphids political?

I have two “Peace” roses. One is three years old and flowered well in its first year, less so in its second. This year, still no sign of a bud. Probably a candidate for a terminal extraction. Peace 2. on the other hand, has lots of buds. All covered in aphids. She’s a year younger but, squatters aside, looks remarkably better than Peace 1 did in year 2. Peace is, unfortunately, prone to black spot. But when she flowers, the blooms are worth the effort.

“Wild Edric” is often regarded as a hedging rose but I’m growing it as a specimen, not a hedge. I planted it late last year as a bare root but it’s growing strongly and I’m looking forward to lots of blooms. Like Peace 2, it’s covered in aphids. The downside is that, being a hedging rose, it has more thorns than stems. It’s bloody lethal!

When I wanted a blue rose (I know there’s no such thing but), I’d started by looking at the popular “Blue Moon” but decided it wasn’t going to work for me and so sidestepped in the direction of “Rhapsody in Blue”, a better, and repeat, flowerer with the added bonus of hue change from the initial purple to the later mauve. Indeed, some assert that she’s the nearest to blue there is in a rose when she hits that mauve stage. She’s budding well and aphid-free. Fellow blogger Gill Heavens bought one this year and her blog has a photo of a bloom at it’s mauve stage.

Then there’s the white rose. She was a prezzie and given, supposedly, as “Iceberg”. Let’s dispose of that thought straight away – “Iceberg” she is definitely not!

After some research, I’m guessing that this is actually a rose called “Peek-a-Boo”. She’s also going rampant, covered in small white blooms.. Generally I prune roses by the book to promote the right sort of growth and flowers. If this is Peek-a-Boo, later this year I’ll be removing her Boo  and stuff the books. She may be reliable but she ain’t going to take over another square metre of my borders, even if she’s never seen an aphid in her life here.

My final rose is a B&Q rescue job. One of two. The other one didn’t make it. But I relish the occasional challenge and she cost me a quid (two if you allow for her demised sibling). She’s apparently called Poetry in Motion and she’s blooming nicely. Buds are an orangey-red, opening to a pinky-white.

Now I just want Peace and Edric to wakAe up properly and I’ll be a happy bunny.

I’ll end with a little plug. Over on my web site, I have a directory of gardening blogs, now approaching 200 and growing monthly. If you’re into blog reading, why not pop over for a look, find some blogs that are new to you, visit them and say hello.

8 thoughts on “Roses Grow on You” 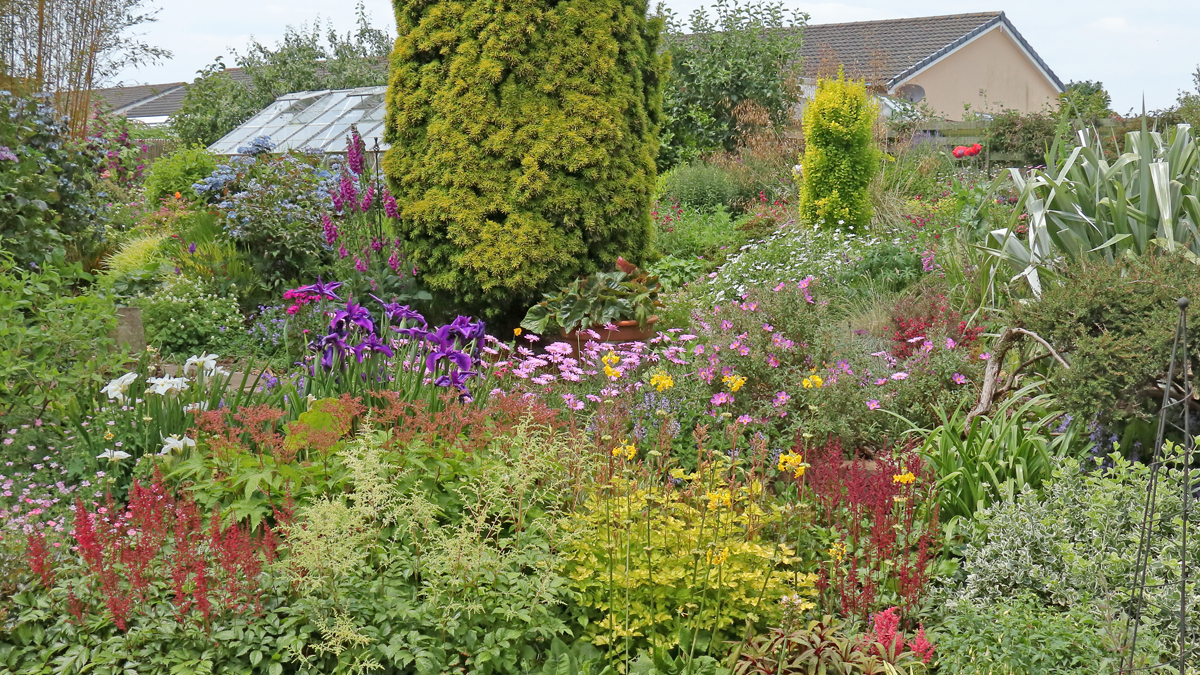