It’s been a bit of a week. Not a day has passed without plants arriving (some enterprising chap even turned up on Sunday!). The icing on the cake was the arrival of three big boxes containing a total of 360 garden ready bedding plants from the lovely people at Thompson and Morgan. They very kindly let me have an email to let me know that this somewhat large consignment had been despatched and that I should expect delivery in around four days. Their kindness was much appreciated, especially given that they sent the email twelve hours after the consignment was deposited in my hallway as I wondered what the heck I was going to do with it.

I’ve also worked out that by adopting a sort of conveyor belt system I can pot on those little plug plants at the rate of 200 an hour. Which is good to know if you have 700 little plug plants to pot on. I cheated by rehydrating some bales of coir before I started timing myself.

Betwixt and between all the fun and games I have managed to find time to put a six of sorts together in homage to the all-powerful Mr Prop. I found the time because I ran out of coffee beans for my grind and brew gizmo and had to resort to instant coffee which is a lot less tasty but a lot quicker to make. So here we go.

A couple more of the perennial Geraniums have come into flower.

Up close, you can see the difference in the centres of the flowers. But from a distance this isn’t so easy to see. But most people will point to the easy indicator between the two Gs – the foliage.

I have three or four or maybe five (I’ve lost count) more Geraniums to come. Please be patient.

2 Born to be Wild

Wild Edric to be precise. The first of my roses to flower. These early flowers are less than perfect – I find that the first blooms on any rose show some difference when compared to the decent ones that come a bit later. Still, I’m not complaining about half a dozen early rose blooms, even if they’re not quite right.

3 The Best Things Are Welsh

Meconopsis Cambrica, the Welsh poppy. Can be a bit difficult if it doesn’t like its spot. This was originally planted about twenty feet away. The plant died. Then I planted one about six feet away. That plant died but not before performing some kind of magic trick to make this plant appear where it did last year and has done again this year. It is clearly happy in the home it has found for itself. Who am I to argue.

4 Sometimes the English Do OK Though!

I’ve been trying to eradicate the Spanish invaders for years. As my methods got more drastic, this involved completely removing bluebells from most of the garden and I now only have one patch of “oldies” left. I buried 150 new bulbs of certified English stock in the autumn of 2017 and was rewarded with about ten sets of leaves last year. This year, though, they’ve managed a better performance. Now I wait to see whether they remain English next year.

Last week the Notorious GH included a photo of an opening Osteospermum. This is a fully open flower from the mother plant. Just so you know what they look like when they wake up completely.

6 Just When You Think It’s All Over

I’d thought that the display of Narcissus was over for the year. But I was wrong. These late birds have just appeared amongst the jungle of declining foliage.

Right I’m off to shift a couple of thousand (2,250 to be precise) kilos of soil and stuff from my drive. With luck it will all arrive at its ultimate destination today and I’ll have covered it with plants by the end of the weekend.

Meanwhile, you can all nip over to Mr Prop’s place where you’ll find (repeat visits advised) a growing list of links to other sixes. Be warned, though, the experience may damage your wealth!

Until next time, enjoy your garden. 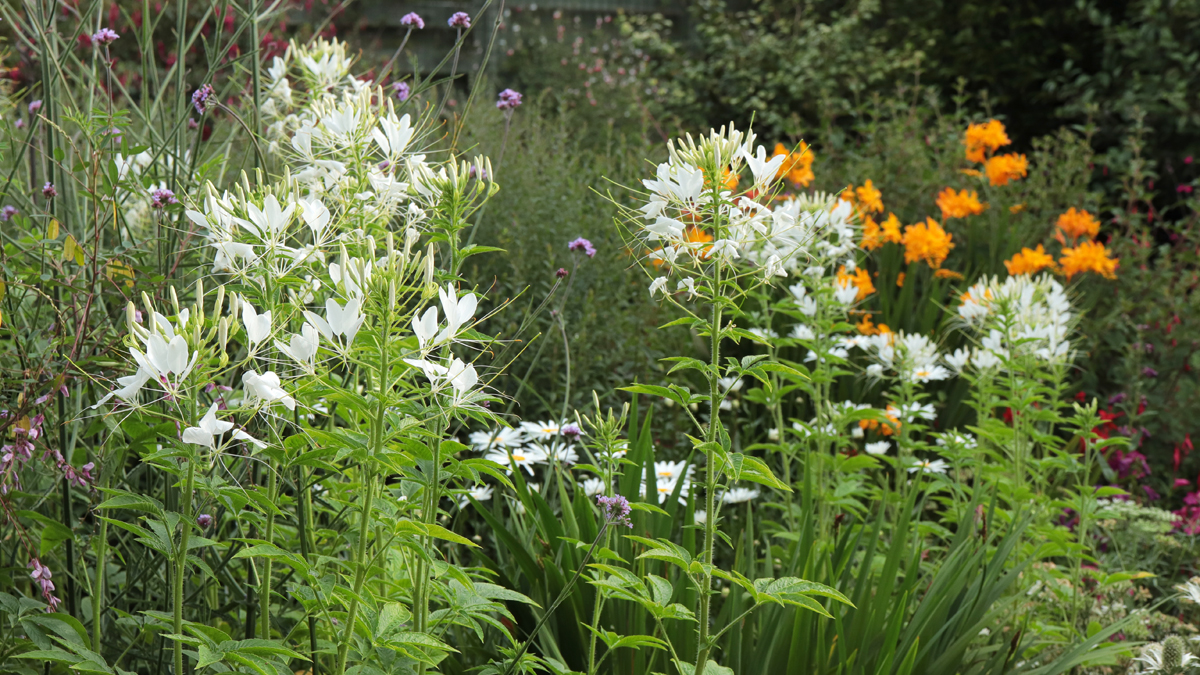 Back from the dead