I’ve had a frustrating four weeks! What started as a niggle grew, without any help from me, into a total exile from the world of WordPress. I found at first that I was unable to “like” any posts on other blogs; then I wasn’t able to comment on other blogs; then I wasn’t able to comment on MY OWN blog and, finally, I couldn’t even log into my blog to post. I fiddled, whilst my WordPress city burned down around me, I faffed, totally at a loss as to what offence I had given to the gods of Automattic which had caused them to withdraw their bounteous goodness from me. I guessed (there are things about which I don’t have a clue, you know) and I even sought help from the Great Goddess of the Heavens.

For the last few weeks, my Kindle Reader has been plugging a book called “The Lost Girls of Devon” as its startup display. Now there has always been something ethereal about the meme’s most famous Devonian. But why, do you ask (well, maybe you don’t) is all of this relevant to my account of recent travails? As I tried to work out what was going wrong, I discovered that, for some reason beyond my ken, WordPress was insisting that I had logged into Gill’s blog. Something had to be done! But to be safe, I asked her to check her dashboard to see if, in fact, I had somehow established a mystical connection to her. With her usual speed, definition and kindness, she responded “What a mystery?”. So I felt safe in detaching myself from her apron strings.

WordPress immediately started telling me that I needed to log in to Gill’s blog in order to do anything. Oh well. Now I like flexibility. So I have several ways to get at WordPress. On the desktop I can fire up the browser and log into my blogs dashboard to post or I can use the WordPress app for Windows. Ditto on my tablet. And then I have the WordPress android app on the smartphone. And all these channels are there when I want to read someone else’s blog, comment, like and so on. After several weeks of trying all sorts of approaches, including zapping the apps from everywhere and reinstalling them, disconnecting from my WordPress account, resetting that and reconnecting and generally doing all sorts of things that I didn’t know I was doing, I have finally made progress.

I can now post to my own blog again. Yay for that, But only on the desktop via the browser into my dashboard. I can “like” others’ posts. Yay for that! But only via the WordPress app on my phone. I can comment from the desktop and phone. Yay for that! But, so far, only on Gill’s blog and not on the tablet. So my next goal is to be able to comment more widely. I’ll get there but, until I do, please do know that I am reading all your blogs and liking them, even if that’s all I can do. And I’m reading your comments on my blog, even if that’s all I can do so far. I’ll catch up with the backlog of comments needing replies as soon as I can. By the way, I think others may also be having problems as a few of my regular readers have told me via email or Twitter that they’ve tried to comment on my posts but can’t.

Meanwhile, the world order that is Six on Saturday is chugging along nicely under the stewardship of He Who Must Be Obeyed, the indomitable Mr Propagator. So pop over to his blog, pour yourself a large mug of coffee, or whatever you imbibe (seems that gin is an acceptable morning drink on the south side of the Bristol Channel) and follow the almost endless list of links to other SoSers’ posts of the day. But be warned, this process may be injurious to your purse or wallet.

The unfortunate demise of resident cat means that I can now indulge my desires indoors as well as out without fear of plants being toppled (feline exhuberance), sprayed (feline territorialism) or – gulp! – treated as substitute litter trays (feline laziness). So my first today is a Dracaena. This currently has two “trunks” at ground level with both splitting higher up so there’s a total of five “heads”. There are signs that a third “trunk” will soon emerge at the base. The place I bought it from labels it as “virtually unkillable”. I love a challenge!

My second is a pair (bear with me, there’s a system here) of Sansevieria. Now it seems that whilst these are clearly different varieties (note the leaf markings), I can’t find anything in my library to say what, if any, their different names are. But the supplier very kindly names all their plants. So the top one is “Zey” and the bottom one is “Susie”. That’ll do for now. I do wonder, though, whether whoever came up with their common names had a certain troublesome relative – “Snake Plant” and “Mother-in-Law’s Tongue” do sort of go together!

I told you I had a system. My third’s a trio. Sorry you had to scroll down past three pics in a column. I said I could post again, not that I could arrange photos in horizontal rows or galleries! But I digress. A trio of Begonias. I know you can grow these foliage types (which do occasionally flower, albeit rather weakly, and I can’t be bothered to deflower them) outdoors but you either dig them up in autumn and bring them indoors or treat them as annuals. So I’ve saved all the fuss and grown them indoors from tiny little plugs. This is their second year and now they’ve been brought from their hiding place in a guest bedroom (which cat couldn’t get into) into the conservatory where I can actually look at them.

Well, what did you expect. This is chez Rivendell after all so it had to be this variety. And, indeed, I now have four! I’ve tried growing good ol’ Miss Wilmott before but she’s always given up the ghost. Maybe my soil is too heavy for her. So last year I planted a single ‘Blue Hobbit’ in the perennial bed in Edifice 2 (so I manage to  get a mention of that in). And clearly it was happy there for it seeded itself and this year there are three in the perennial bed and a fourth has come up in the alpine bed next door. Now that bed was made for alpines and the top two inches of “soil” is in fact two inches of pea gravel. Interesting how a non-alpine plant seems to like alpine conditions.

5 Hydrangea Something or Other

I gave you a duet of Hydrangeas in my last post before being forced into exile. I mentioned a third (blue) one – that has now actually decided to wake up though I doubt it will flower. There is a fourth, in the front garden, that’s a double of one of the duet, With me? This Hydrangea is therefore number 5. The theme continues. One thru four are what I’d call “normal” – 2-3 feet high. This one is a comparative monster at about 8 feet. Can’t remember the variety but so what. I don’t prune it, as such, merely applying the hedgetrimmer once a year to carelessly remove about three feet of growth. That’s three feet top and side! I dread to think what would happen if I left it one year!

Look folks, I’ve only got 5 digits on each hand and I need the right one to type so that’s the end of my system. Tough. Back to Edifice 2 and we have this little Crocosmia growing in the one of the alpine beds. The corms are about 3 inches down so they’re in the layer that’s 75:25 pea gravel:soil. It’s only about 40cm tall, a lot smaller than your typical garden types. It’s there because so many alpines flower in the spring and I wanted some colour to extend the season. This’ll do nicely, thanks.

Well that’s six. Sorry I can’t give you daylilies. I had quite a symphony of those a couple of weeks ago but no way to present them to you. And, of course, they’ve all gone over now so are no longer topical. But I can give you news of Woodstock. He has now clearly decided that ground-feeding is beneath him and he’s now an exclusive bird-feeder-bird. Still, the fat git has made room for other birds to ground-feed and I’m happy to report the arrival of a whatever-you-call-it of collared doves – I’ve counted 8 feeding at the same time! And no more bird strikes. Them butterflies are working.

See you again soon (WordPress willing). Until then, enjoy your gardens. 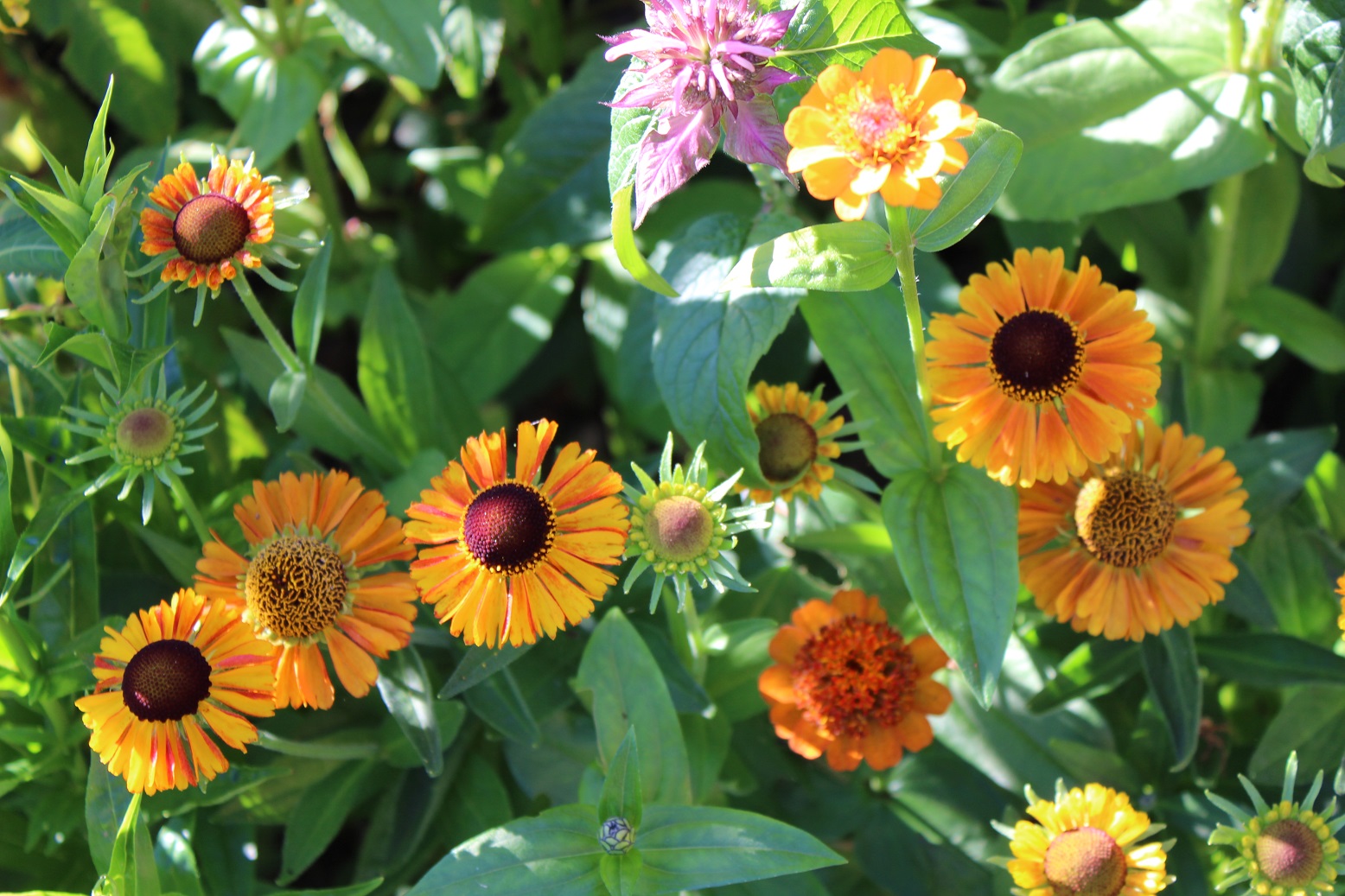 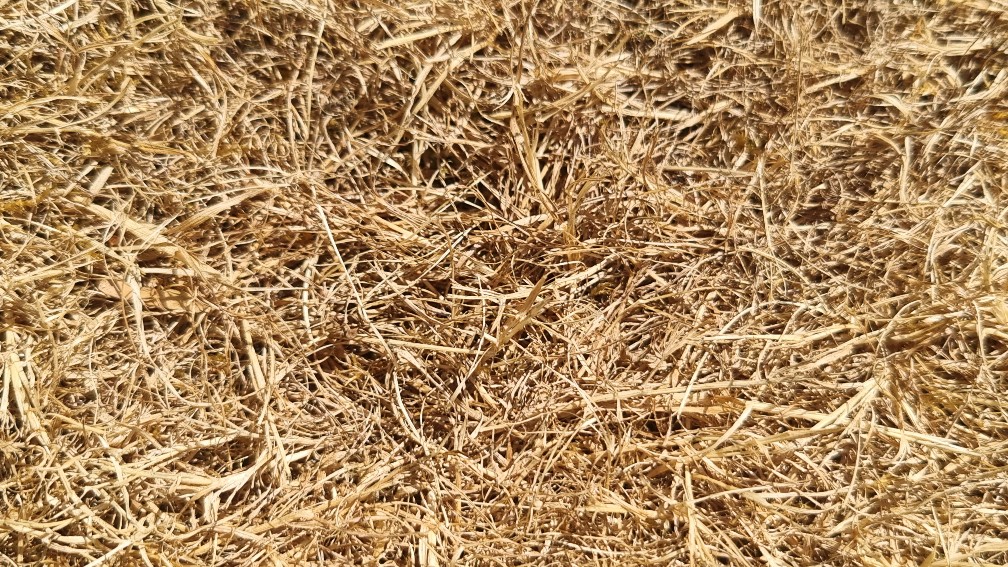 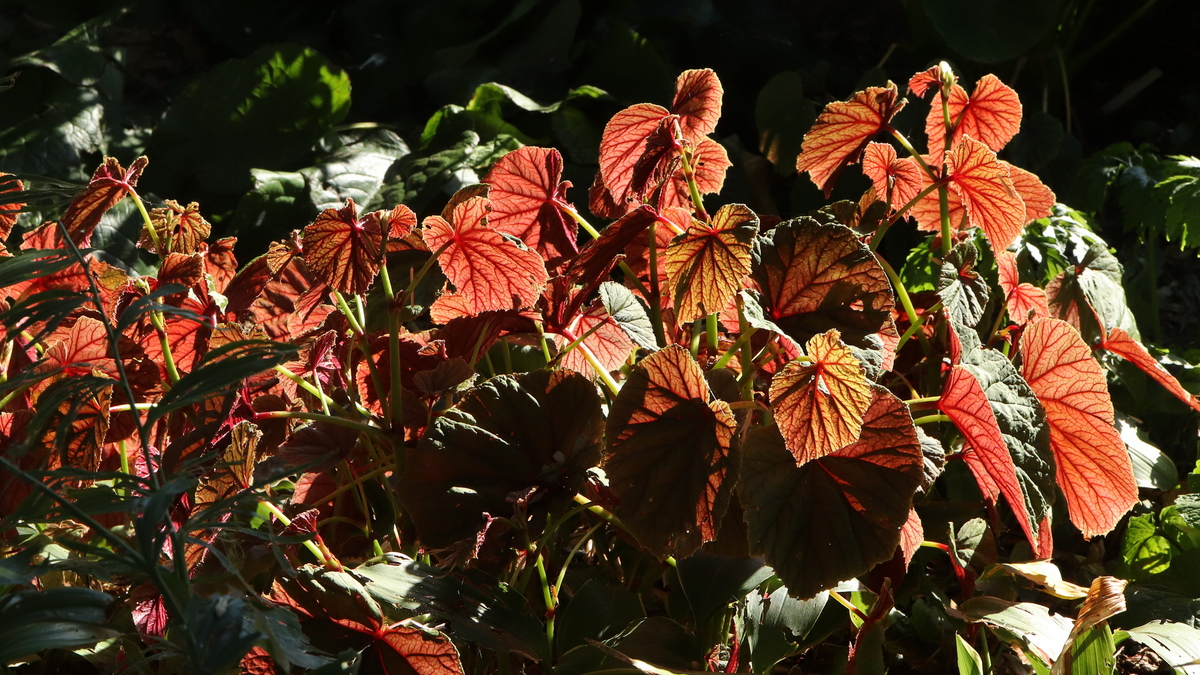